Facilities in this program area are inspected for general sanitation and safety, and include Children’s Camps, Hotels & Motels (Temporary Residences), Campgrounds, Swimming Pools, Bathing Beaches, Mobile Home Parks, Tattoo/Body Piercing Shops, Tanning Beds/Booths, and Agricultural Fairgrounds.  Facilities are inspected annually with the exception of Tanning Beds/Booths, which are inspected once every two years.  Owners, Operators, and Users can click on the forms below for more information.

Get Ahead of Lead

*All temporary food service operations that do not secure a permit to operate at least 10 days prior to the start of the event will be charged an additional $25.00 late fee.

*If a permit is issued on-site due to not properly submitting paperwork at least 10 days prior to the start of the event, a $25.00 late fee will be charged.

Watch for information about the next FREE Rabies Vaccination Clinic

Allegany County Department of Health wants to remind all Allegany County residents with possible contact or exposure to a bat to make every attempt to “Catch the Bat!”

What is rabies?
Rabies is a deadly disease caused by a virus that attacks the central nervous system (brain and spinal cord). Infected mammals can transmit rabies virus to humans and other mammals. Rabies is almost always fatal once symptoms appear. Fortunately, only a few human cases are reported each year in the United States.

What animals can get rabies?
Rabies is most often seen among wild animals such as raccoons, bats, skunks and foxes, but any mammal can be infected with rabies. Pets and livestock can get rabies if they are not vaccinated to protect them against infection. Among domestic animals, cats are most frequently diagnosed with rabies in New York State.

Some animals almost never get rabies. These include rabbits and small rodents such as squirrels, chipmunks, rats, mice, guinea pigs, gerbils and hamsters. It is possible for these animals to get rabies, but only in rare circumstances, such as if they are attacked but not killed by a rabid animal.

Reptiles (such as lizards and snakes), amphibians (like frogs), birds, fish and insects do not get or carry rabies.

What are the signs of rabies in animals?
The first sign of rabies is usually a change in an animal’s behavior. It may become unusually aggressive or tame. The animal may lose its fear of people and natural enemies. A wild animal may appear affectionate and friendly. It may become excited or irritable and attack anything in its path. Staggering, convulsions, choking, frothing at the mouth and paralysis are sometimes seen. Many animals will make very unusual sounds. Infected animals usually die within one week after showing signs of rabies.

How do people become exposed to rabies?
People usually get exposed to the rabies virus when an infected animal bites them. Exposure may also occur if saliva from a rabid animal enters an open cut or mucous membrane (eyes, nose or mouth).

Permits are issued for the installation of new or replacement systems, through which department staff design, oversee, and approve the final construction of systems to ensure they meet state sanitary code requirements.  Loan surveys are conducted as part of residential real estate transfers in order to check on the functioning of existing septic systems as part of the sales process.

Public Health Sanitarians from the Allegany County Department of Health can conduct sanitary loan surveys to assess the functionality of septic systems and potability of water in real property transactions. Real Estate Agents, Attorneys and Sellers may find the forms above helpful.

New for 2022: Independent contractors who want to provide sanitary surveys as part of their service must first receive training and pass a test administered by the Environmental Health Department. Training and testing will be held at the Department of Health on June 15th at 1:00 p.m. and June 22nd at 9:00 a.m.

The Allegany County Department of Health is now offering Coliform and E. coli sampling for Municipalities that have Public Water Supplies.

Municipalities can drop the sample(s) off at our accredited lab on the Third Floor at the County Building located at 7 Court Street in Belmont, NY  14813.

The Environmental Health Division investigates complaints received to determine if a possible public health hazard or threat exists that could negatively impact Allegany County residents. Complaints include everything from public health nuisances (garbage, insects, vermin, etc.), to problems with sewage systems, food service facilities, community sanitation program-related facilities, indoor and outdoor air quality, smoking in prohibited areas, private and public water supplies or any other department of health regulated facility.  If you wish to file a formal complaint, please do so by filling out the complaint form below and submit it to our office.  Please Note:  the complaint form must be signed and dated in order for it to be considered valid. 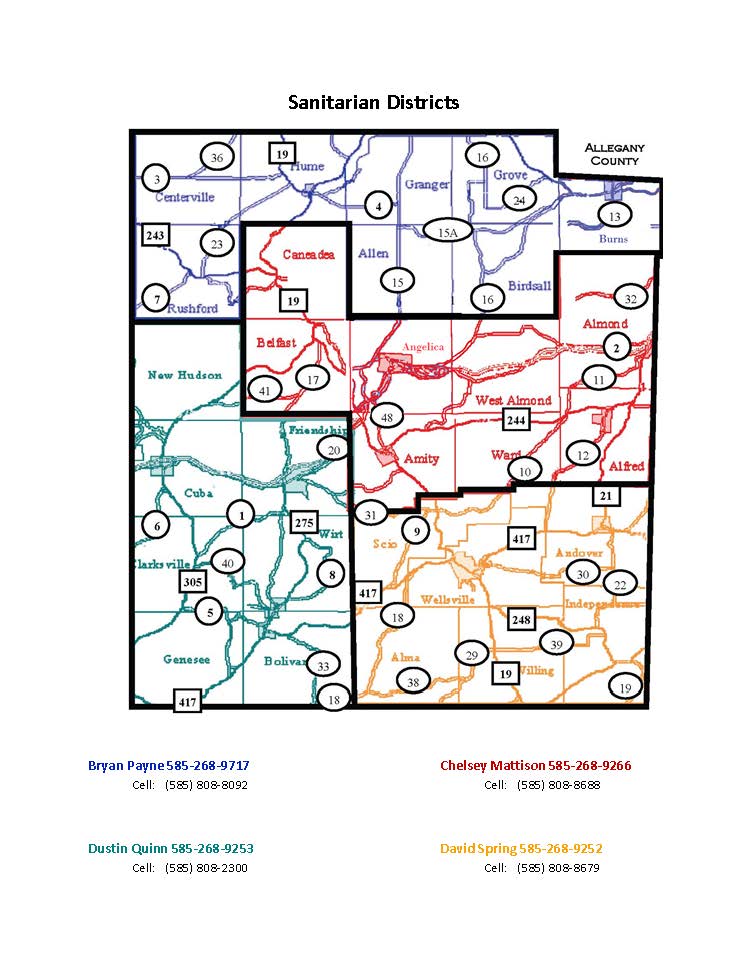