Allegany County Undersheriff Kevin Monroe graduated from the 271st Session of the FBI National Academy at Quantico, VA on March 16th.  The training session consisted of men and women from 48 states, the District of Columbia, 5 military organizations, 5 federal civilian organizations and 18 international countries. FBI Director Christopher Asher Wray was the principal speaker at the ceremony.

The National Academy which was launched in 1935 as the “Police Training School” is now Internationally known for its academic excellence, the National Academy Program, held at the FBI Academy, offers ten weeks of advanced communication, leadership, and fitness training for selected officers having proven records as professionals within their agencies.

Sheriff Whitney noted “I congratulate Kevin on this great accomplishment and on his dedication to our office. This is just another example that Allegany County is committed to keeping up to date and having professional leaders in its workforce.” 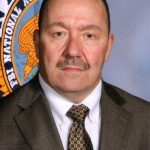 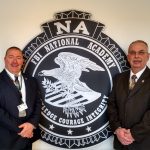 Undersheriff Monroe and Sheriff Whitney at the graduation ceremony