At the Board of Legislator’s meeting held Monday, September 14th, 2020, Chairman of the Board Curt Crandall declared the Week of September 20th through the 26th of 2020 to be Sheriff’s Week in the following proclamation:

WHEREAS, despite changes in its function, status, and powers during its long history, the Office of Sheriff has maintained a continuous existence, preserved its distinguishing heritage, and continued to be an essential component of our community; and

WHEREAS, the Office of Sheriff has evolved into a modern, professionally accredited, full-service public safety agency, manned by fully trained police and peace officers, as well as civilians using state-of-the­ art technology and applying the latest and most advanced theories and practices in the criminal justice, civil process, corrections, 911 communications, and court security; and

WHERERAS, the Office of Sheriff is unique in the Allegany County community, and the duties of the Office go far beyond the traditional role of “Conservator of the Peace,” and extend into many facets of public service, including, maintaining the county jail, providing security in our courts, dispatching 911 emergency services, communication systems, and serving and executing civil process and victim protection orders for our courts; and

WHEREAS, as a constitutionally empowered entity directly responsible to the people, the ancient Office of Sheriff remains, even today, responsive to public safety needs and accountable to the public it serves; and

WHEREAS, it is fitting to celebrate the historical contributions of the Office of Sheriff and the significant role that the Sheriff’s Office plays in our modern criminal justice system;

NOW, THEREFORE, I Curtis W. Crandall, Chairman of the Allegany County Board of Legislators, hereby proclaim the week of September 20-26, 2020, as SHERIFF’S WEEK in Allegany County. 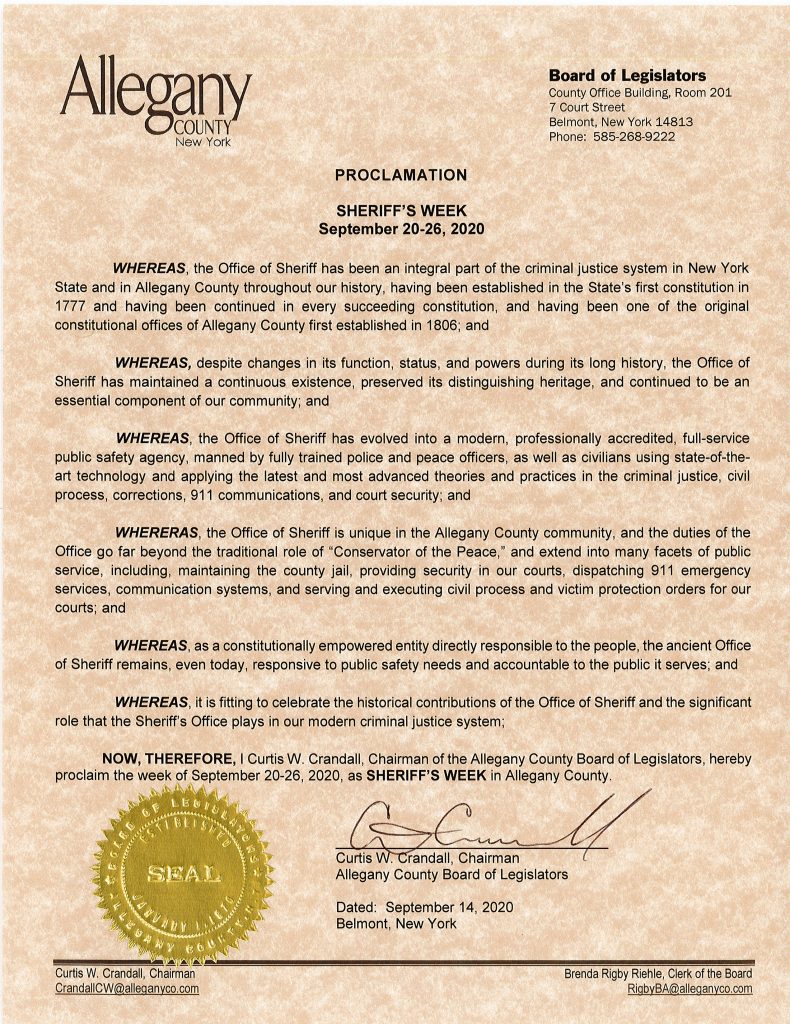